The latest release of Episerver A/B testing adds the ability to add custom goals for conversion. This post shows how it's possible to create a custom KPI that will trigger a conversion when a user matches a visitor group.

How to implement a custom goal

Its possible to implement a custom goal by implenting the IKpi interface. The code below simply adds a Kpi once a user has matched a visitor group:

Once implemented you can select your custom goal in the coversion goal section of the A/B test UI: 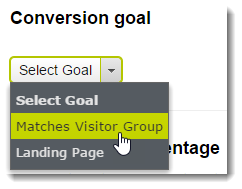 Then its possible to select parameters for your goal:

Please note: The code above and the points below are based on the current released version (v1.0.5) and the A/B test functionality is still in beta. Episerver beta software means that the software is production ready, however it is subject to change outside the normal constraints of semantic versioning.

Points of interest in the implementation

Official documentation describing how to implement custom Kpis and also covers some of the elements above can be found here: http://world.episerver.com/documentation/developer-guides/CMS/key-performance-indicators-kpis/.

The new IKpi interface makes it easy to add to the built in Kpi's. It should be easy to build specific A/B tests meaning you can tailor your solution to each customer's business.