As of EPiServer Commerce 8.15 Price events are now available in the core product. More information: http://world.episerver.com/blogs/Quan-Mai/Dates/2015/7/new-events-for-price-and-inventory-updates/

A new version of PriceEvents has been released with some minor ammendments.

As of EPiServer Commerce 8.15 Price events are now available in the core product. More information: http://world.episerver.com/blogs/Quan-Mai/Dates/2015/7/new-events-for-price-and-inventory-updates/ 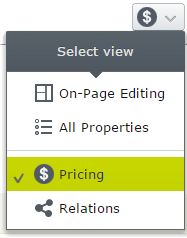 When developing a EPiServer Commerce solution it may be necessary to listen for events that let us know pricing has changed. By default EPiServer Commerce does not broadcast an event when prices change so I wanted to put a solution together that allowed developers to subscribe to events in a similar way that we can for content events in EPiServer.

So what use does this have? I can think of a number of uses where listening to events on pricing may be useful:

This post describes a simple claims helper block I put together. This block can come in useful if you are using federated authentication and would like to inspect all claims for the current user.

I created this whilst developing the solution for implementing federated security in EPiServer using Auth0.

This is due to the fact that when using federated security EPiServer respects the http://schemas.microsoft.com/ws/2008/06/identity/claims/role claim to check access rights. However many providers do not issue these claims so we need an Auth0 rule to create some roles then do a little work in EPiServer to map them into http://schemas.microsoft.com/ws/2008/06/identity/claims/role claims.

This post describes how to allow federated security in EPiServer using Auth0. Auth0 is an identity broker that's extensible, enterprise class and reduces the friction between identity infrastructure and developers. I'm not affiliated with Auth0 in any way so this post is written from my own (admittedly very good) experience with Auth0. The post contains a number of step by step instructions and is intended to be an example on how to use Auth0 with EPiServer. The original demo was presented in November 2014 at the EPiServer UK customer and partner day.

This is a quick post about some useful debugging tools available when working on custom development within an EPiServer site. Per Bjurstrom has already blogged about EPiServer 7: Startup Performance. This revealed the URL "/<episerverUI>/Shell/Debug/ShowTimeMeters" which helps you look up how long your initialisation modules take to load.