Most importantly for me it I noted it coud configured to support the WS-Federation protocol (WS-FED). This means it should be easy to set an Episerver site using the standard infrastructure we have to set up federated security in Episerver.

So this post is a knowledge share to ensure I have notes in case I need to do this it again in the future.

The initial proof of concept was planned as follows:

The implementation we were looking to achieve was as follows: 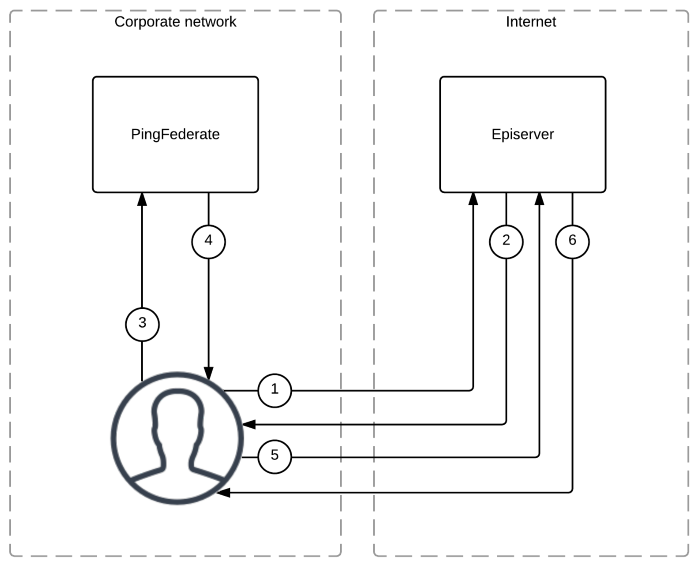 The execution flow in the steps above are as follows:

The Episerver part was remarkably simple and followed the standard guideline for integrating implementing federated security in Episerver.

I implemented a custom ISynchronizingUserService to create custom roles based on the Active Directory attributes that were issued by the PingFederate Server as claims. The code for this is here but note it was written in haste during the POC and your implementation may extend/change this:

Points of interest and advice

When working on a proof of concept such as this its always best to make the ivestment in time and get people with the right knowledge in the room. From the customer side we had a PingFederate Server expert, from the Episerver side I had myself and finally we had the partner who will be performing the implementation for the customer. This ensured knowledge was transferred immediately and that we collaborated quickly to build out the proof of concept without the traditional email/ticket bounce that can sometimes hinder progress.

The PingFederate the server itself was on the corporate network and totally inaccessible from the outside world. This meant the XML meta data was not accessible directly from Episerver. So it has to be manually exported and made available to Episerver.

This also meant we were authenticating an Episerver instance running in the public cloud against an internal identity service which really delivered on a "best of of both" approach where the Cloud is used to deliver a customer's site whilst all authentication and indentity is managed internally.

The following links are useful information about federated security in Episerver and PingFederate:

The entire proof of concept took a couple of hours and if you ignore the inherent complexities of a complex indentity infrastructure was implemented without fuss using standard protocols and technologies.

I personally think every new project should consider federated security as it cleanly separates authentication concerns and ensure customers stay in control of their user's identities whilst allowing Episerver implementors to concentrate on the Episerver implementation components.