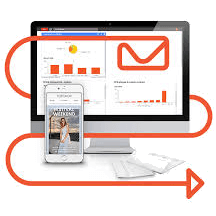 The demo scenario is as follows:

A user visits the homepage of a site and fills in their contact details. When coming back to the homepage the messaging changes to say "you've got mail" showing how Episerver understands that the user has received an email from Episerver Campaign. The user takes a look at the mail. On visiting the homepage of the site the messaging changes to show that the site understands that the mail has been opened, but they have not yet opened it. Finally the user clicks the link in the email and the site homepage again changes.

It was used to demonstrate how marketers could use Episerver CMS, Insight and Campaign to build relevant experiences for users based on what was known about they interactions, even if they are off-site interactions.

A video of the demo can been seen here showing the user in Insight and how the interactions build up over time:

The demo flow can be seen below:

Specific information about this diagram is shown below: